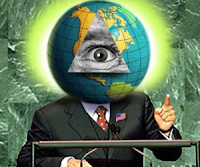 In the 1997 film, Conspiracy Theory, Jerry Fletcher says, “A good conspiracy theory is unprovable. I mean if you can prove it, it means they screwed up somewhere along the line.” In other words, sometimes conspiracy theories are true, such as Agenda 21. END_OF_DOCUMENT_TOKEN_TO_BE_REPLACED

In a July 25, 1787 letter to George Washington, the Presiding Officer of the Constitutional Convention, John Jay wrote as follows: “Permit me to hint, whether it would be wise and seasonable to provide a strong check to the admission of Foreigners into the administration of our national Government; and to declare expressly that the Commander in Chief of the American Army shall not be given to, nor devolve on, any but a natural born Citizen.” END_OF_DOCUMENT_TOKEN_TO_BE_REPLACED

Alex Jones talks with journalist and author Webster Tarpley, who is currently on a fact-finding mission to Libya.

While we were not watching, conspiracy theory has undergone Orwellian redefinition.

A “conspiracy theory” no longer means an event explained by a conspiracy. Instead, it now means any explanation, or even a fact, that is out of step with the government’s explanation and that of its media pimps. (emphasis added)

In other words, as truth becomes uncomfortable for government and its Ministry of Propaganda, truth is redefined as conspiracy theory, by which is meant an absurd and laughable explanation that we should ignore. END_OF_DOCUMENT_TOKEN_TO_BE_REPLACED

Many who stop by The T-Room to catch up on the latest alternative news know we have posted numerous investigative reports written by journalist, Wayne Madsen. We do this because Wayne’s work is informed by a career of learning how the US intelligence apparatus operates, because he worked in it, and because he is the only investigative journalist actually doing the job of informing the public who Barack Hussein Obama and his family truly are. His reward, having his life threatened.

Ask yourself if you ever recall a time when an American journalist’s life was threatened by his/our federal government for simply informing the people who their President is? Seriously, do you recall such circumstances?

During the 2008 campaign everyone seemed to be asking the same question – who is this guy named Obama? Democrats, Republicans, Libertarians, Greenies, Independents…EVERYONE!

We hoped to learn who this man was, what drove him, what his values and morals were, his education, his past leadership positions and so much more, but to our astonishment, the vehicle who used to vet Presidential nominees, were having tingly sensations down their legs, hyper ventilating when Obama was nearby, girlhood like crushes and handing off other ridiculous, juvenile and pathetic dribble they called journalism. END_OF_DOCUMENT_TOKEN_TO_BE_REPLACED

h/t Wayne Madsen Reports – WE WILL NEVER FORGET WHAT THE MILITARY-INDUSTRIAL-INTELLIGENCE COMPLEX DID ON THIS DAY IN 1963. THANKS MR. OBAMA, FOR AWARDING GHW BUSH, ONE OF THE CONSPIRATORS, THE MEDAL OF “FREEDOM” MERE DAYS BEFORE THIS DARK ANNIVERSARY — YOU ARE TRULY DISGRACEFUL AND A COMPLETE TOOL OF THE SAME MILITARY-INDUSTRIAL-INTELLIGENCE COMPLEX END_OF_DOCUMENT_TOKEN_TO_BE_REPLACED