Below the fold is an awesome  infographic detailing the Goliath vs David fight in labeling all foods with “Genetically Modified Organisms’ aka GMOs. California lost round one of its ballot initiative by a mere 3% last year while Vermont and Massachusetts state legislatures have bills pending but are under threat of lawsuits if passed. Washington state’s ballot initiative will be decided by voters next week. Check this graphic out and please consider forwarding it onto your lists – END_OF_DOCUMENT_TOKEN_TO_BE_REPLACED

Medics are saying saturated fat may not be the devil incarnate. Just don’t expect an apology from low-fat food purveyors 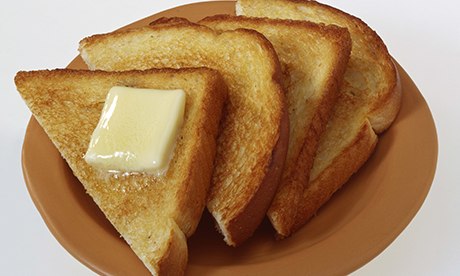 The anti-sat-fat message has been used effectively by food manufacturers to woo us away from whole, natural foods, such as butter, which is only minimally processed, on to their products, which are entirely the opposite, such as margarine.’ Photograph: Jupiterimages/Getty Images/Comstock Images

Government and health charities have been doling out duff healthy eating advice for decades, but when are they going to admit it? That’s the question raised by the remarks of cardiologist Aseem Malhotra, who writing in the BMJ has challenged the orthodoxy that END_OF_DOCUMENT_TOKEN_TO_BE_REPLACED

END_OF_DOCUMENT_TOKEN_TO_BE_REPLACED

Here’s a movie worth watching over the weekend –

“Imagine that a storm blows across your garden and that now, genetically-manipulated seeds are in your crops. A multi-national corporation pay you a visit, demand that you surrender your crops – and then sue you for $200 000 for the illegal use of patented, GM seeds. In this definitive David and Goliath battle, END_OF_DOCUMENT_TOKEN_TO_BE_REPLACED

Whole Foods Market just announced they will label all GMO foods by 2018 including their meat and dairy products. END_OF_DOCUMENT_TOKEN_TO_BE_REPLACED

END_OF_DOCUMENT_TOKEN_TO_BE_REPLACED

Why don’t we have the right to know whether food and beverages we buy at our local grocery store are “genetically modified?” More disturbingly, why are the companies who use GMO in their products spending untold millions and millions of dollars to make sure we never do? END_OF_DOCUMENT_TOKEN_TO_BE_REPLACED

After two years of study, French researchers secretly studied the affects of transgenic maize (NK603) and Roundup pesticide, on 200 rats. The results of the study should set off alarms throughout the USDA, FDA, the farming community and the people of the United States. END_OF_DOCUMENT_TOKEN_TO_BE_REPLACED

“There’s nothing they are leaving untouched: the mustard, the okra, the bringe oil, the rice, the cauliflower. Once they have established the norm: that seed can be owned as their property, royalties can be collected. We will depend on them for every seed we grow of every crop we grow. If they control seed, they control food, they know it — it’s strategic. It’s more powerful than bombs. It’s more powerful than guns. This is the best way to control the populations of the world. The story starts in the White House, where Monsanto often got its way by exerting disproportionate influence over policymakers via the “revolving door”. One example is Michael Taylor, who worked for Monsanto as an attorney before being appointed as deputy commissioner of the US Food and Drug Administration (FDA) in 1991. While at the FDA, the authority that deals with all US food approvals, Taylor made crucial decisions that led to the approval of GE foods and crops. Then he returned to Monsanto, becoming the company’s vice president for public policy.”

“Thanks to these intimate links between Monsanto and government agencies, the US adopted GE foods and crops without proper testing, without consumer labeling and in spite of serious questions hanging over their safety. Not coincidentally, Monsanto supplies 90 percent of the GE seeds used by the US market. Monsanto’s long arm stretched so far that, in the early nineties, the US Food and Drugs Agency even ignored warnings of their own scientists, who were cautioning that GE crops could cause negative health effects. Other tactics the company uses to stifle concerns about their products include misleading advertising, bribery and concealing scientific evidence.”

Watch the full length documentary – The World According to Monsanto

Be certain to click the ‘Full Story’ link below the vid to read “Judge Sides With Monsanto Over Small Organic Farmers“.

END_OF_DOCUMENT_TOKEN_TO_BE_REPLACED

Editors note: Controlling Our Food: The World According to Monsanto – Full length documentary below the fold.

Many have long suspected that U.S. policy on genetically modified (GM) organisms was being influenced by the multinational corporations that profit from genetic engineering and the export-oriented agribusiness. However, recently released Wikileaks cables document just how close that relationship has become.

The U.S. Department of State has virtually become an agency for promoting the private interests of the Monsanto Corporation.

As European social movements pressure their governments for an ongoing moratorium on GM seeds and foods, Monsanto and other biotech corporations have been pushing to find new market footholds, using hybrids even in impoverished Haiti following the January 12, 2010 earthquake. They have been pursuing such goals in collaboration with USAID, the U.S. State Department and the Gates Foundation Alliance for a Green Revolution in Africa (AGRA).

“The collusion of the Gates Foundation with Monsanto corporation is no accident, as high level officials leading AGRA are former Monsanto executives. The recent purchase by AGRA of $500,000 worth in Monsanto stocks was vivid proof of that close relationship. Despite many words by Gates officials since the inception of the AGRA agenda denying that GMO seeds would be used as part of AGRA, their close relationship with Monsanto has now been revealed to be a key element in their agronomic ‘new green revolution’ strategy.”

The T-Room will never offer Frankenfish on the menu. We are definitely one of the nine out of 10 American’s who oppose eating or feeding our customers, family and friends this insane Genetically Modified Fish (GMO).

Once again, 41’s shadow CIA is implicated in JFK’s assisination. Fascinating to see the factual information being reported on mainstream media. There is no question 41’s shadow CIA interfered with the investigation and no question 41 was in Dallas on the morning of the fatal shooting. END_OF_DOCUMENT_TOKEN_TO_BE_REPLACED