I can breath for the first time. A ceasefire has been declared and my family is safe and unharmed. Endless gratitude to the resistance — 48Refugee (@48Refugee) August 26, 2014

confirmed information, ALL of the Palestinian leadership backs call to join ICC, the ICC themselves want Pal to join. Only exception: Abbas. Live blog: Thousands of people have taken to the streets of the #Gaza Strip to celebrate the start of the #ceasefire http://t.co/bKPI68Esvh — Middle East Eye (@MiddleEastEye) August 26, 2014 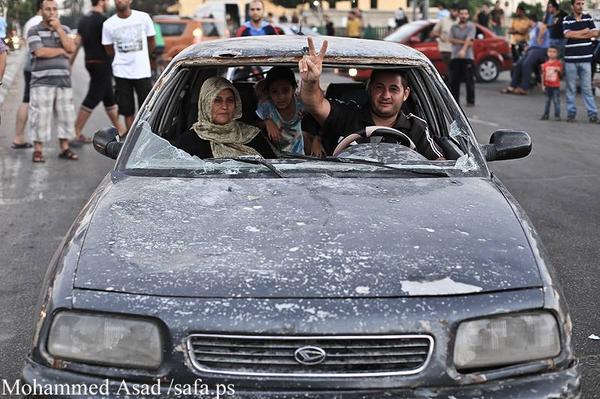 More than 2133 Palestinians killed, 11K wounded… 51 days of #GazaUnderAttack: The Israeli assault on #Gaza is over, but occupation is NOT. — Rania Zabaneh (@RZabaneh) August 26, 2014

This is pissing me off! STOP THE DAMN FUCKING SPORADIC GUNFIRE IN THE AIR! #Gaza #ceasefire — Omar Ghraieb (@Omar_Gaza) August 26, 2014

Palestinians in #Gaza are now flooding the streets to celebrate the ceasefire after 51 of ongoing carnage and destruction. #Love   — Maha Rezeq – مها رزق (@GazaInAndOut) August 26, 2014

Reminder, Mahmoud Abbas had ZERO EXCUSED not to ratify the Rome Statute, and now he has -1 excuses http://t.co/6BxeVF1eie #ICC4Israel NOW! — Jalal (@JalalAK_jojo) August 26, 2014

Abbas now says he wants to avoid “useless negotiations,” says terms must be clear. Has he ever abided by his own guidance? — Max Blumenthal (@MaxBlumenthal) August 26, 2014 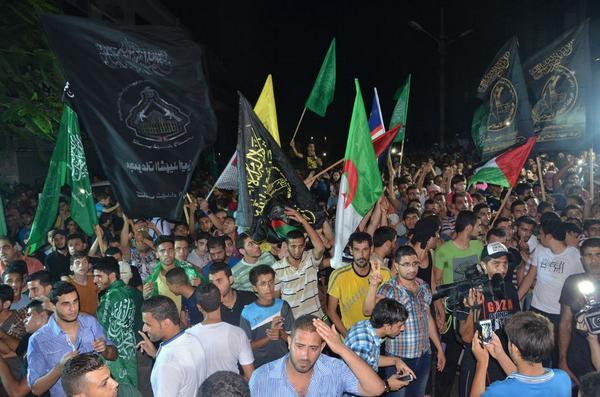 “Together we will rebuild our free country”, said Mahmoud Abbas in Cairo, right before requesting an Israeli permit to return to Ramallah.

The Nation is reporting “about 60,000 African migrants have arrived in Israel since 2006, fleeing unrest in their home countries. But upon arrival in the ostensibly democratic country, the migrants have faced intense persecution and have been branded as “infiltrators” by right-wing politicians and activists.”

Documentarist and journalist David Sheen and Max Blumenthal,  author of “Goliath: Life and Loathing in Israel” teamed up to produce the short documentary below, which clearly shows the orchestrated efforts by Israel’s leadership, religious and political, to foment a dangerous public backlash against African migrants and refugees. To witness such hatred by America’s number one ally is well, extremely troubling –

And this from Israel’s Haaretz news –

Read a key chapter “How to Kill Goyim and influence People” from “Goliath: Life and Loathing in Greater Israel” by clicking HERE. END_OF_DOCUMENT_TOKEN_TO_BE_REPLACED

Real News reports “despite GOP attacks on Obama’s Israel positions, his record of appeasing both Netanyahu’s Likud government and the Israel lobby has earned him the support of most American Zionists, and a few key friends in high places.” END_OF_DOCUMENT_TOKEN_TO_BE_REPLACED

Dr. Trita Parsi, author of A Single Roll of the Dice: Obama’s Diplomacy with Iran, was interviewed by Jon Stewart of the Daily Show this week detailing how the Bush Preemptive War Doctrine and then the Obama Administrations missed diplomatic opportunities w/Iran resulting in the untenable situation the nation finds itself in. END_OF_DOCUMENT_TOKEN_TO_BE_REPLACED

Why is the Arab League suspending Syria? Russia’s foreign minister suggests Western countries aka the United States are trying to stir up opposition in Syria so as to topple President Bashar al-Assad. This strategy appears to be Clinton’s State Departments modus operandi, that is using Soros funded infiltrators to stir up opposition that leads to the overthrow of those who apparently are not kowtowing to the Council on Foreign Relations and Tri-Lateral Commissions “New World Order” goal. END_OF_DOCUMENT_TOKEN_TO_BE_REPLACED

In this RT interview independent journalist, James Corbett, details the fact that on Monday, November 1, 2011 the Arab League brokered a deal with Bashar al-Assad, Syria’s President “easing the country’s long-running political crisis.” As Corbett reports “the agreement urges Damascus to immediately withdraw security forces from the streets, release jailed demonstrators, and start dialogue with the opposition. Syria also agreed to allow rights groups and Arab League watchdogs into the country. But the U.S. still says it wants to see President Assad resign” and suggests Syria’s geographical location as strategic to the US to launch an offensive into Iran. END_OF_DOCUMENT_TOKEN_TO_BE_REPLACED

Inside Story discusses with PJ Crowley, former US State Dept Spokesman, Jamal Khashoggi, Gen. Manager of Al Arab News Channel, and Salmon Shaikh, Director, Brookings Institute Doha about the upcoming vote at the UN Security Council on Palestinian statehood based on the 1967 border agreement. The US has stated it will exercise it’s Veto power if 9 out of the 15 member’s vote in favor of statehood.

Editor’s Note: For eleven days now, citizens of Egypt have taken to the streets demanding the removal of their repressive dictator Hosni Mubarak. Today, they are protesting in front of the Presidential Palace. The people of Egypt want this man gone and who can blame them after living under such oppressive tyranny for nearly 30 years. By all accounts from reputable journalists, not the propaganda talking heads, the United States appartchik has played a rather significant role in training, mobilizing and funding the youth of Egypt to rise up and demand Mubarak’s immediate departure (see Archives of Daily Specials to read the numerous articles detailing the US involvement). Yet, when the protests heated up the US started playing footsie with these citizens lives, 300 dead and counting,  rather than taking a principled position and practicing what they preach ad nauseum – “We are committed to building democracies around the globe thereby giving the people their rights and freedom.”

So why the footsie game? Could the US appatchik be stalling the removal of their puppet Mubarak for other nefarious reasons?  Many “real” journalists are avid students of the history of US relations with Egypt, Tunisia, Yemen to name a few, and are offering thoughtful insights. However, few appear to be connecting the US apparatchiks torture and rendition policies, beginning in the nineties, to the current US double talk. Following are two reports:  first is a recent report produced by Global Reports detailing “Obama’s block on the US Torture Probe” and, the second, a “Special Report-Obama’s gambit: Holding Egypt for Holder” by investigative journalist Wayne Madsen of Wayne Madsen Reports. Maybe these two well founded and documented reports will shed some light on the very real reasons for the US Appartchik’s current double talk.

WMR has learned from a well-informed political insider that President Obama and Secretary of State Hillary Clinton have waffled on support for Egypt’s pro-democracy revolution in order to safeguard a covert U.S.-Egyptian rendition and torture program that dates back to the Clinton administration. In fact, Clinton’s Deputy Attorney General, Eric Holder, now Obama’s Attorney General, was the first Department of Justice official to write a legal brief authorizing the rendition of alleged terrorists from third countries by the CIA to Egypt for purposes of interrogation and torture. END_OF_DOCUMENT_TOKEN_TO_BE_REPLACED

With Israeli officials, including Prime Minister Binyamin Netanyahu, continuing their gloating over the disclosure by Wikileaks of classified U.S. State Department cables, the U.S. intelligence community is taking off its gloves and is releasing some embarrassing information about Netanyahu and a Mossad attempt to use a divorce involving the President of Yemen’s family to penetrate the president’s family’s inner circle in a possible blackmail attempt.

Wikileaks’s founder, Julian Assange, singled out Netanyahu for praise as a world leader who believes the embarrassing leaks will aid “global diplomacy.” In an interview with Time magazine, Assange said “Netanyahu believes that the result of this publication, which makes the sentiments of many privately held beliefs public, are promising a pretty good . . . . [and] will lead to some kind of increase in the peace process in the Middle East and particularly in relation to Iran.” Assange, who is believed to be in the United Kingdom, is the subject of an INTERPOL arrest warrant for alleged “sex crimes” in Sweden. END_OF_DOCUMENT_TOKEN_TO_BE_REPLACED

MEMORANDUM FOR: The President
FROM: Veteran Intelligence Professionals for Sanity (VIPS)
SUBJECT: War With Iran

We write to alert you to the likelihood that Israel will attack Iran as early as this month. This would likely lead to a wider war. Israel’s leaders would calculate that once the battle is joined, it will be politically untenable for you to give anything less than unstinting support to Israel, no matter how the war started, and that U.S. troops and weaponry would flow freely. Wider war could eventually result in destruction of the state of Israel. This can be stopped, but only if you move quickly to preempt an Israeli attack by publicly condemning such a move before it happens. END_OF_DOCUMENT_TOKEN_TO_BE_REPLACED

The T-Room endorses JVP’s efforts to end the Zionist occupation of Palestine. END_OF_DOCUMENT_TOKEN_TO_BE_REPLACED