(Ed. Note: Marcy Wheeler and Jim White over at emptywheel dot com are reporting the source who likely attempted to put pressure on UN’s Ban Ki Moon was none other that John Kerry, the rogue Secretary of State. Click here to read their updates. Now commondreams dot org is reporting on the same facts click here.)

Update: Indeed – just as was suspected, according to the Wall Street Journal’s piece, “U.S., Allies Prepare to Act as Syria Intelligence Mounts,” citing US administration sources, the UN has been urged to end their investigation and withdraw, and both the discredited CIA and their Israeli counterparts claim to have the “intelligence” needed to proceed with military strikes – a verbatim repeat of the fabrications used to rush the world into war with Iraq upon intentionally false pretenses.

The CIA and Israel’s Mossad are neither impartial nor objective, and exist solely to support the interests and objectives of their respective nations.  As explained below, the goal of military intervention and regime change in Syria was a joint and foregone US-Israeli-Saudi conclusion as far back as at least 2007, and some might argue, the early 1990’s.

The Wall Street Journal also reiterated America’s intentions to sidestep the UN and international law to carry out the attacks.

August 28, 2013 (Tony Cartalucci) – Dangerous, yet very familiar “Iraq-esque” twaddle has dominated the headlines ahead of a clearly premeditated military attack against Syria:

“The Obama administration believes that U.S. intelligence has established…”

“…could intervene to stop Syria using such weapons, following a suspected attack last week which is being investigated by the United Nations…”

“…planning to release evidence, possibly as soon as Thursday…”

Missing, of course, is one essential element – actual evidence backing any of the claims being made to justify yet another episode of unprovoked military intervention launched by the US, UK, France, and their collection of regional partners. 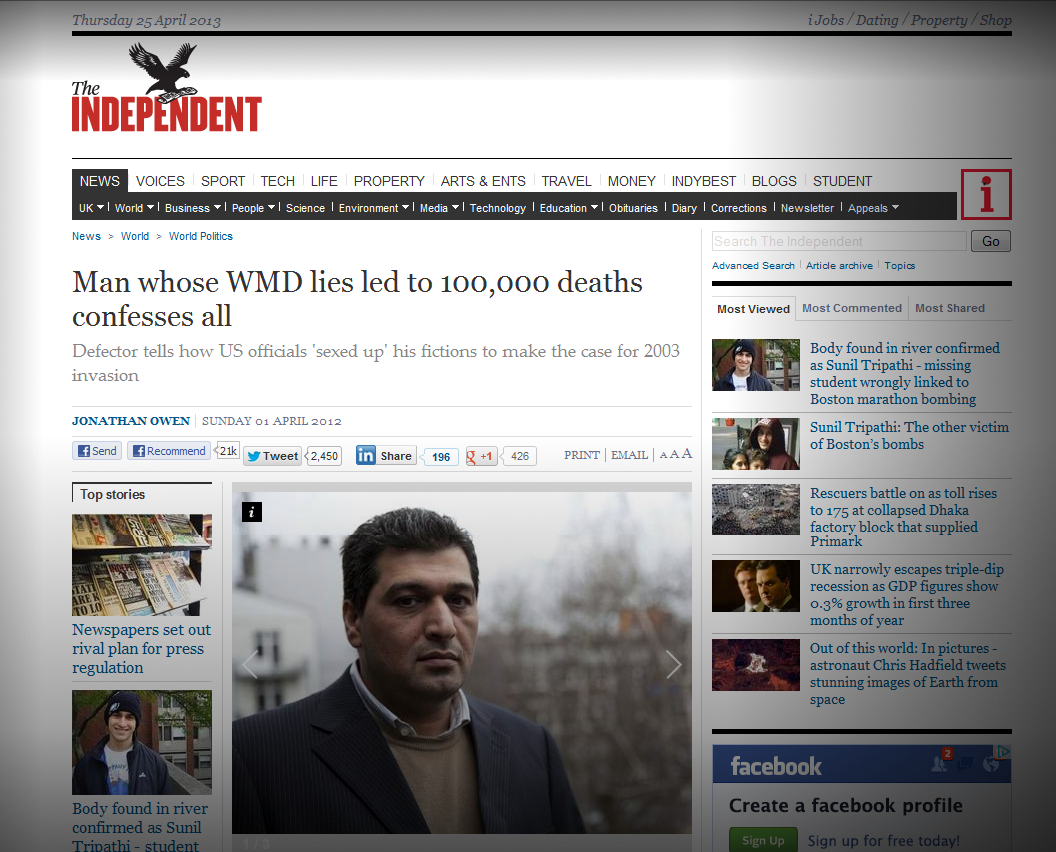 Image: From Independent’s “Man whose WMD lies led to 100,000 deaths confesses all: Defector tells how US officials ‘sexed up’ his fictions to make the case for 2003 invasion.” In retrospect, the corporate-media has no problem admitting the insidious lies that were told to justify the invasion and occupation of Iraq – the lead up to the war was another story. A verbatim repeat of these admitted lies are being directed at Syria amidst the West’s failure to overthrow the government with terrorist proxies.

The West has admitted it will not wait for the UN to finish its inspection of the alleged attack sites and insists instead that it will present its own evidence – presumably from the same CIA and MI6 that fabricated evidence regarding Iraqi weapons of mass destruction they knew did not exist. Whatever the UN does find will almost surely be spun just as it was during the lead up to Iraq.

Such spinning and fabrications eventually led to headlines like “Man whose WMD lies led to 100,000 deaths confesses all.” It can be imagined that after the West accomplishes its goals in Syria, the Western media will likewise divest from the lies they are currently selling to the public, and reveal with a shrug that indeed, Washington, London, Paris, Tel Aviv, and Riyadh never had any evidence to begin with.

While the general public appears to be more than aware that they are being led into yet another unprovoked, costly military adventure, based on “evidence” they neither trust nor believe even exists, they may not realize just how premeditated and deliberate this latest proposed international crime is.