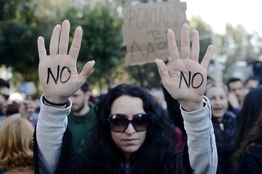 Zerohedge is reporting that Cyprus Parliament must vote on the €23 billion bail in after all while UKIP’s Nigel Farage declares the Cyprus deal was the death knell to to the EU. From Zerohedge –

“When the final “bailout” structure of the Cypriot deposit-confiscatory bail-in was revealed in late March, the implied victory for the Troika (which has since notched up its demands for the insolvent country to now sell its 14 tons of gold) was that instead of the deposit haircut passing as a tax, and thus needing a parliament ratification, it would come in the form of a bank resolution, with Laiki bank liquidating and being subsumed by the remaining Bank of Cyprus, and with uninsured depositors in both banks ending up crushed. However, as previously reported, in the interim period deposit outflows have continued and accelerated despite the assorted ineffective “capital controls” which has led to additional underfunding for the local banks, and to a second bailout of Cyprus, this one rising to €23 billion or a 35% increase from the original, as part of which the Troika has demanded that Cyprus sell their gold in the open market. Now, a month later, it appears that the Troika’s initial victory may have been a Pyrrhic one, as yesterday the Cypriot attorney general announced, and today the government’s spokesman confirmed, that the parliament will have to ratify the €23 billion bailout of the tiny island nation after all, thereby refocusing the popular anger from some ephemeral technocrat in Europe to the country’s own elected representatives, thereby changing the calculus of the Cypriot decision by 180 degrees.”

The vote is reportedly to be held next week which will give Cypriot’s ample time to let their leadership know how they expect them to vote or else. One option is to vote no and prepare to leave the Euro and as Zerohedge points out –

“One word here: Iceland. But we are confident that by now even Cyprus’ population, which has stoically absorbed everything from deposit haircuts to the upcoming forced gold sales, is familiar with what the only success story in Europe to date has been, and why.”

So what exactly will be voted:

“The new vote will cover additional austerity measures drawn up by international creditors – the European Commission, the European Central Bank and the International Monetary Fund (IMF). The measures aim at downsizing the public sector.”

“EU Economy Commissioner Olli Rehn admitted that “mistakes” had been made “under enormous time pressure” in the initial decision to bail in small depositors, which prompted outrage and was rejected by Cypriot lawmakers.”

On the other hand, mistakes were not made when as part of the European Commission’s DSA, the following explanation of what is without doubt the immediate future for Cyprus:

“In accordance with the Cypriot authorities policy plans, major financial institution will be downsized combined with extensive bail-in of uninsured depositors, and a set of wide-ranging temporary capital controls and administrative measures. The programme is envisaged to build the foundation for sustainable growth over the long run. Nevertheless, in the short run, the economic outlook remains challenging. Real GDP is projected to contract by 12½% cumulatively in 2013-14. Short-run economic activity will be negatively affected by the immediate restructuring of the banking sector, which will impact on net credit growth and by additional fiscal consolidation measures. Temporary restrictions required to safeguard financial stability will hamper international capital flows and reduce business volumes in both domestic and internationally oriented companies. The bail-in of uninsured depositors will cause a loss of wealth, which will reduce private consumption and business investment. This, compounded by the impact of fiscal consolidation already undertaken and new measures agreed, will result in a sharp fall in domestic demand. Little reprieve can be expected from exports amid uncertain external conditions and a shrinking financial service sector.”   Zerohedge dot com

And then today you have UKIP’s Nigel Farage openly stating “What you’ve done in Cyprus is you’ve actually sounded the death knell of the euro.” He goes onto state, rather forcefully “this European Union is the New Communism. It is power without limits. Its’ creating a tide of human misery. The sooner it is swept away the better” –